Rich in flavour and fudgy in texture, these double chocolate Kinder Bueno brownies are indulgent, delicious and definitely a must-bake!

Kinder brownies have been on my baking list for a veryyyy long time, so I’m excited to finally share this recipe with you. I was torn between using Kinder Bueno’s (they’re the crispy on the outside cream-filled chocolate bars) or the classic Kinder Chocolate, so in the end, I decided to use both! And if that wasn’t enough, I used a mix of Milk and White chocolate Bueno bars…I know crazy right 😉

The recipe is super easy and the brownies can be prepped and baked in less than an hour. I’ve found that the Bueno bars will burn really easily in the oven if they are placed on top, so it’s best to fold them into the mixture. Finish the brownies with a simple white chocolate drizzle, before slicing up and tucking in.

The texture of brownies can be difficult to get right and it has personally led to a lot of failed attempts in the past. A dry, cakey brownie is just so disappointing! So here are my top three tips to make sure your Kinder Bueno brownies turn out perfectly.

Your Kinder Bueno Brownies will keep at room temperature, in an airtight container, for up to 4 days.

*Even if you’re unsure if your brownies are ready, I would always suggest taking them out as they will continue to cook as they cool. 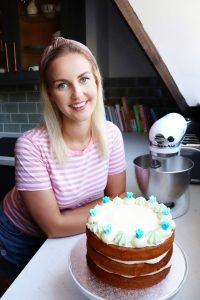