I’ve seen a few snowman recipe ideas around and thought this year I’d give one a go. However there’s a story to tell here…keep reading if you fancy a giggle! 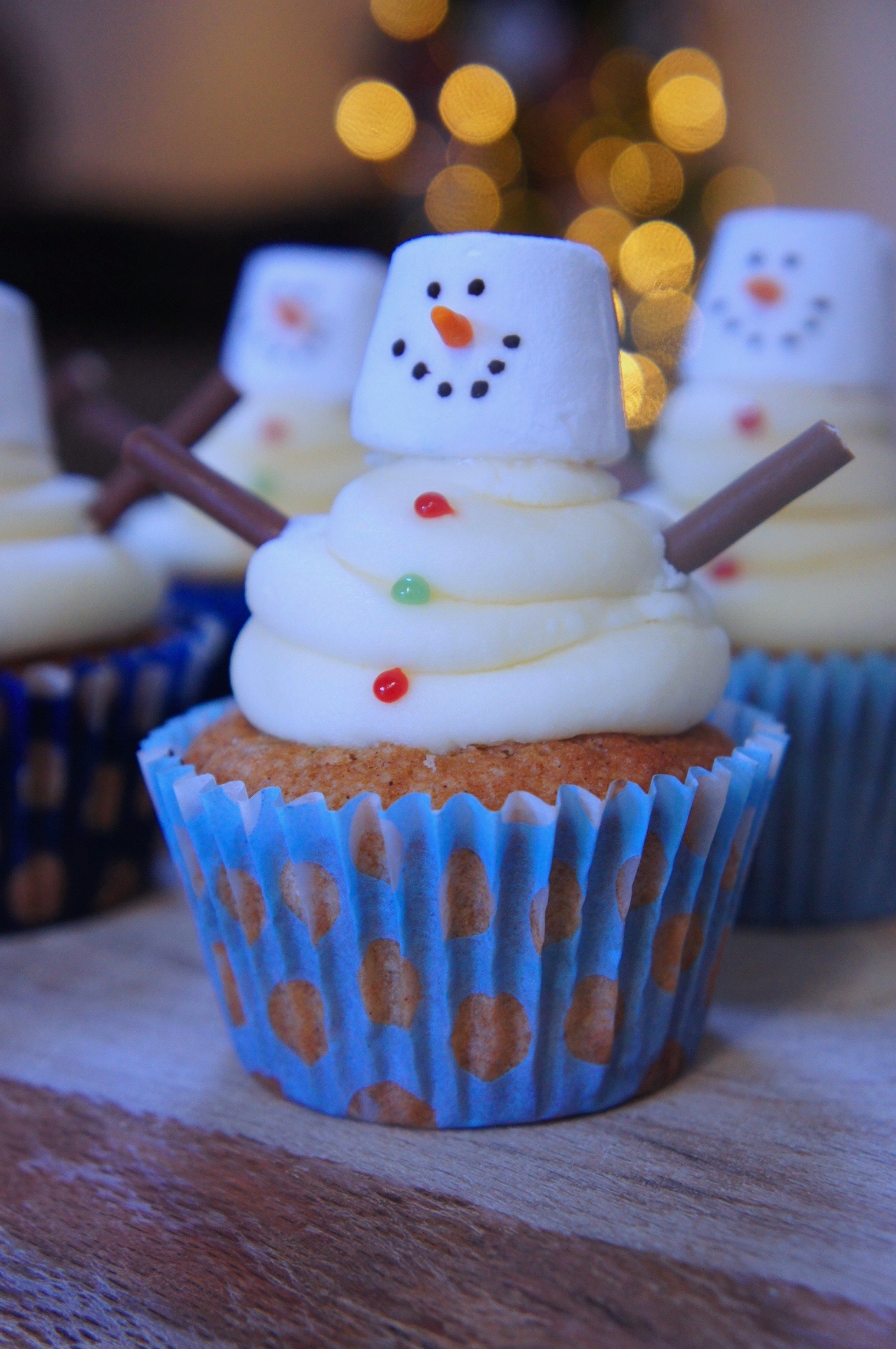 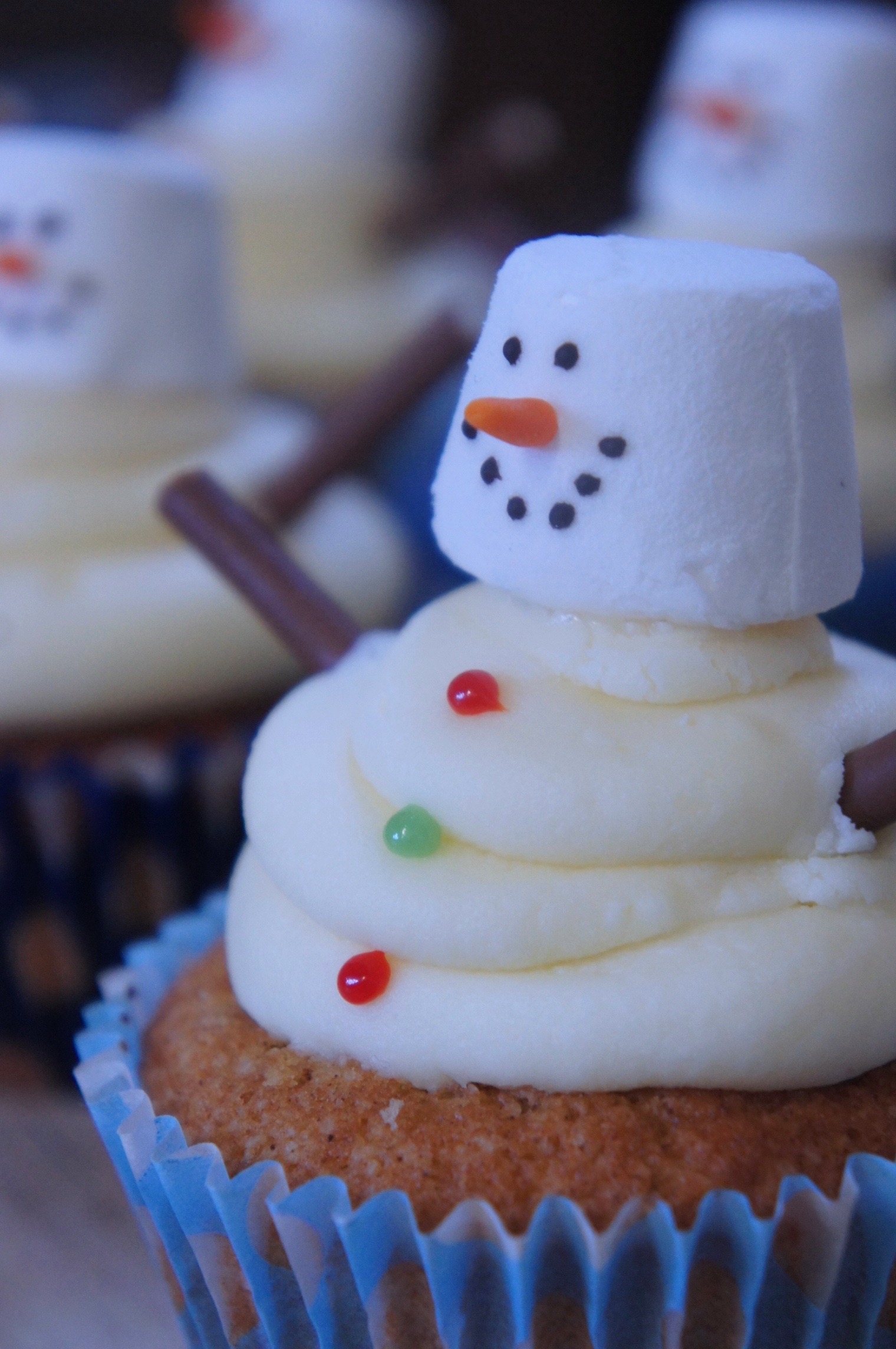 My first attempt was a huge…. disaster! Photo evidence below, try not to laugh 🙂

This got me thinking, how do I make sure my snowmen don’t look like they’ve spent a week on the beach in 30 degree heat!? 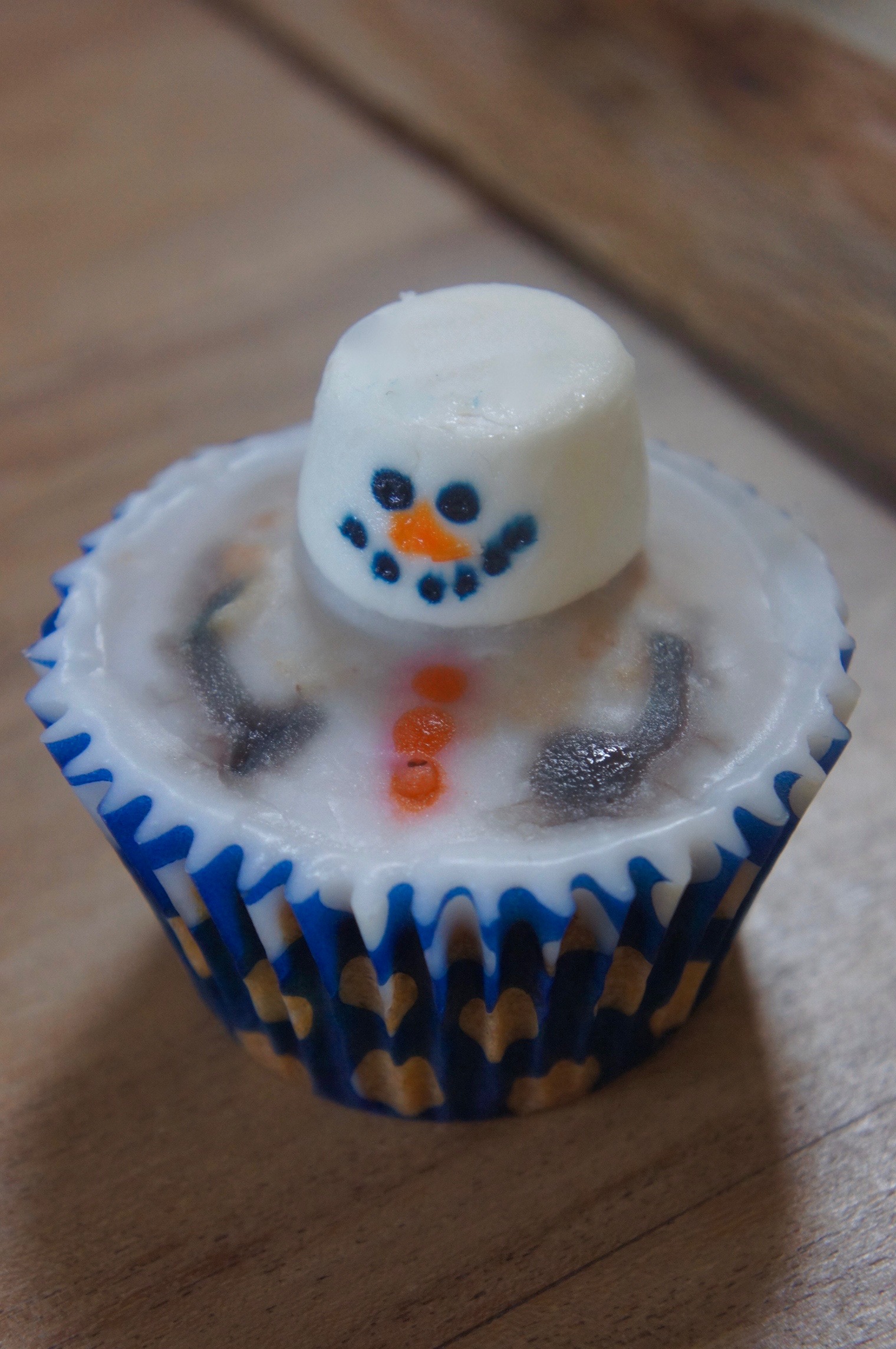 I decided to add some height using white chocolate buttercream. No melted snowmen here! Then using Mikado biscuit sticks I added some ‘twig’ arms. For the eyes and mouth, I used melted chocolate and for the noses, orange sugar paste – nope they are not real carrots carved to be miniature in size like my gran thought 🙂

For the cupcake base, I used my tried and tested vanilla sponge recipe and added white chocolate chips and cinnamon spice for extra festive flavour.

I think it’s safe to say the second attempt turned out a bit better! I have to admit it’s not the quickest/easiest one I’ve posted, but they are great fun to make and the end result is so worth it. So put on your favourite Christmas music and your tackiest festive jumper, or one you don’t mind getting covered in icing sugar, and give it a go!

Start with the cupcakes.

Beat together the butter and sugar until light and fluffy. Mix in the eggs and vanilla extract. Fold in the flour and cinnamon until the mixture is smooth. Now fold in the white chocolate chips. If the mixture is too thick add a tablespoon of milk to loosen it slightly.

Evenly fill the cupcake cases about 3/4 full with the mixture and bake in the oven for 12-14 minutes until golden brown on top and springy to the touch.

Whilst your cakes are cooling you can begin the decoration…

Eyes and Mouth
Melt the squares of milk/dark chocolate in the microwave in 20 second blasts. Using the tip of a cocktail stick, dot the eyes and mouth onto the marshmallows. Set aside and leave to dry.

Noses
For the noses, take a small peice of sugar paste and roll into a cone shape. Cut the end of the nose with a knife to make a sharp flat surface (this will be the end that will attach to the head). Set aside and leave to dry out and harden.

Once for the sugar paste has dried, use an icing sugar and water paste to stick the nose on to the marshmallow head. You will need to hold it in place until it feels firm.

Body
In a microwaveable bowl melt the white chocolate in 30 second blasts until smooth. Beat the butter for at least 5 minutes until really pale in colour (if you have an electric whisk use it, it will save your arms from aching!). Now sift in half the icing sugar and beat until smooth. Repeat with the remaining icing sugar. Pour the white chocolate in, add the milk, fold until the buttercream is smooth, creamy and light.

To assemble a snowman…

Start with the body
Using a piping bag with a large open circular nozzle, pipe the buttercream in a swirly motion starting from the middle and circulating outwards and upwards. If you don’t have a piping bag you can achieve something similar with a spoon, using the back to create definition.

Add the head
Place a marshmallow on top of the buttercream swirl.

And the arms
Snap a Mikado stick in half and push into each side of the buttercream.

And finally the buttons
Using the icing pens dot buttons on the body of the snowman.

Repeat this for all 12 cupcakes. If you think they’re simply too cute to eat, they will last in the fridge for up to five days or on the counter for two.